Types and Examples of Suspicious Transactions: A Closer Look 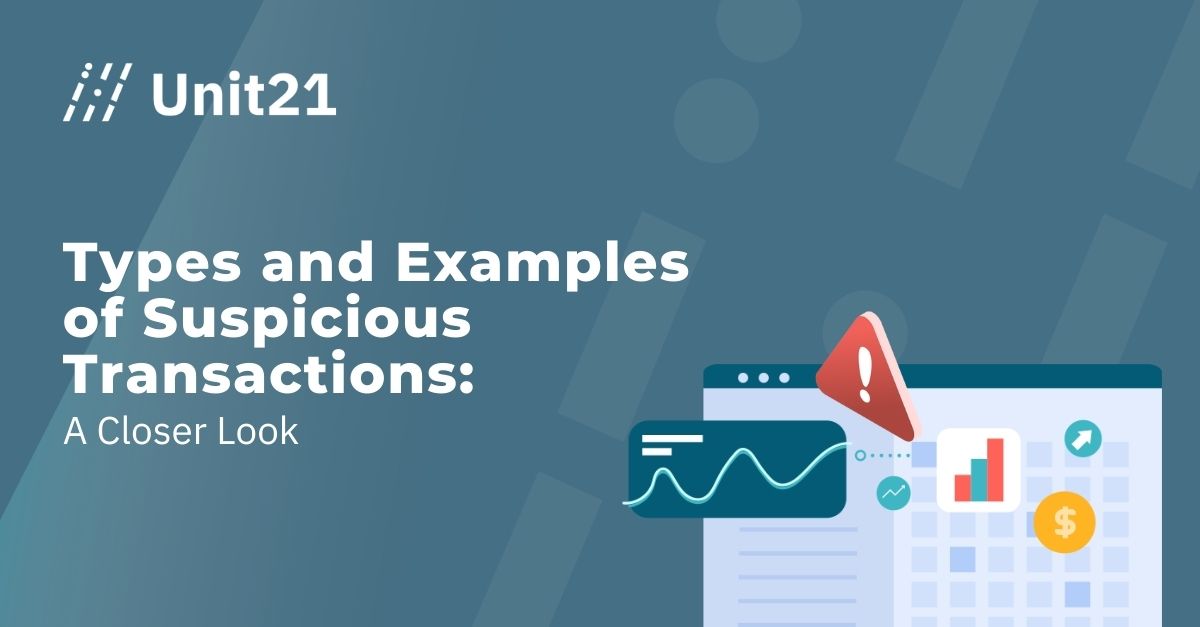 However, there are plenty of financial activities that might seem beyond “the ordinary course of business,” and these examples of suspicious transactions might not only put the financial institution’s clients at risk, but they can also create potential legal and financial problems for the bank itself.

Suspicious and malicious activity, unfortunately, is widespread. In fact, in less than two decades—between 1999 and 2017—American financial institutions identified more than $2 trillion of suspicious activities. That figure mirrors the entire annual GDP of Italy, the country with the eighth highest GDP in the world.

Furthermore, keep in mind that this figure merely represents the level of suspicious activity filed via a SAR (Suspicious Activity Report)—it is highly likely that plenty more suspicious activity, perhaps as much as $1 trillion worth, occurred during this same period.

Since it’s not an exact science, there is always going to be some level of manual investigation into potentially suspicious transactions in order to determine whether a report must be filed.

Here, we’ll dig into this topic to help you understand the nuances around what constitutes a suspicious transaction and what doesn’t, and how to identify reasonable grounds for action.

What Makes a Financial Transaction Suspicious?

For example, it might make sense for a petroleum supplier to receive a $100 million wire transfer from a foreign conglomerate, but if that same action were to appear in the account of a local non-profit, it would raise some red flags.

Finding the “threshold” for what constitutes suspicious activity is far from easy. However, by keeping a few basic principles and protocols in mind, financial institutions of all kinds can make some much-needed changes and improve how they monitor suspicious activity.

Generally speaking, a financial transaction might be deemed suspicious if it is unlike any other activity that has occurred within that account. Of course, an activity being new will not necessarily mean that any malicious actions have occurred.

For example, an individual making a sizeable down payment on their first home is an activity that is unusual but not malicious. The processes involved in identifying suspicious activity are far from cut and dry. However, it is still a good idea to flag—and potentially follow up on—any action that seems far from the norm.

As FinCEN—the Financial Crimes Enforcement Network—has helped describe, transactions that “serve no business or other legal purpose and for which available facts provide no reasonable explanation” are one of the most common signs of suspicious activity.

The Bank Secrecy Act (BSA) which was signed into law in 1970, establishes responsibility for financial institutions to keep an eye out for signs of suspicious activities and report them to the corresponding authorities (usually within 30 days). The purpose of this Act is to combat some of the most common forms of suspicious activity, including money laundering, theft, tax evasion, financial fraud, and more.

However, the BSA, contrary to some other financial regulations, still contains a lot of gray areas. Financial institutions will want to ensure they are compliant and report these sorts of activities within a timely manner (or else face fines and possible legal consequences). But at the same time, they will need to balance their account holders’ fundamental rights to privacy.

Ultimately, no formula will clarify that a given activity must be reported or will never need to be reported. But carefully monitoring for a few common red flags—substantial transactions, transactions from an unclear location, foreign transactions, identity fraud, and others—will help these institutions better balance their seemingly “competing” interests.

Types and Examples of Suspicious Transactions

As the Federal Deposit Insurance Corporation (FDIC) helps explain, many different types of transactions might trigger the need to file a SAR. These can include, but are by no means limited to, the following transactions:

When Should You Respond to a Potentially Suspicious Transaction?

There are several different types of suspicion that might, eventually, necessitate the need to file a report.

At first, a financial institution might have a “simple suspicion”—at this point in time, they might have a hunch or believe that suspicious activity might be occurring but do not yet have enough evidence or reason to file a report.

Eventually, this simple suspicion might grow into reasonable grounds to suspect—this occurs once they have a legitimate reason to suspect illicit activity is occurring. Then, they have some evidence to prove that their suspicion is more than an ordinary “hunch.”

At this point, it is unlikely that the accused party could be convicted of any crime within the criminal justice system. Nevertheless, by law, even a tiny red flag or a single piece of tangible evidence should be considered enough to file a suspicious activity report. Keep in mind, only some SARs are followed up on (The Bank Policy Institute reports that as few as 4% are reviewed by law enforcement), and an even smaller fraction ever results in a criminal conviction.

As evidence continues to build—more suspicious transactions occur, there are signs of financial crimes, etc.—a suspicion might eventually become grounds to believe that illicit activity has occurred. By this point, financial institutions have a legal (and perhaps moral) obligation to report this activity to authorities.

Ultimately, while there is not an explicit cutoff for what constitutes suspicious activity, it is incumbent of these institutions to keep an eye out for the early signs that any of the activities listed above have occurred.

Luckily, with technologies like Unit21, monitoring, investigating, and reporting these sorts of activities is easier than ever before. With diligence, a thorough understanding of the law, and a commitment to consistent banking, both large and small financial institutions can develop the SAR protocols they need to remain compliant and help in the fight against financial fraud.

For more information about how Unit21 can help, get in touch today.