What to Know About AML Fines and Penalties for 2022 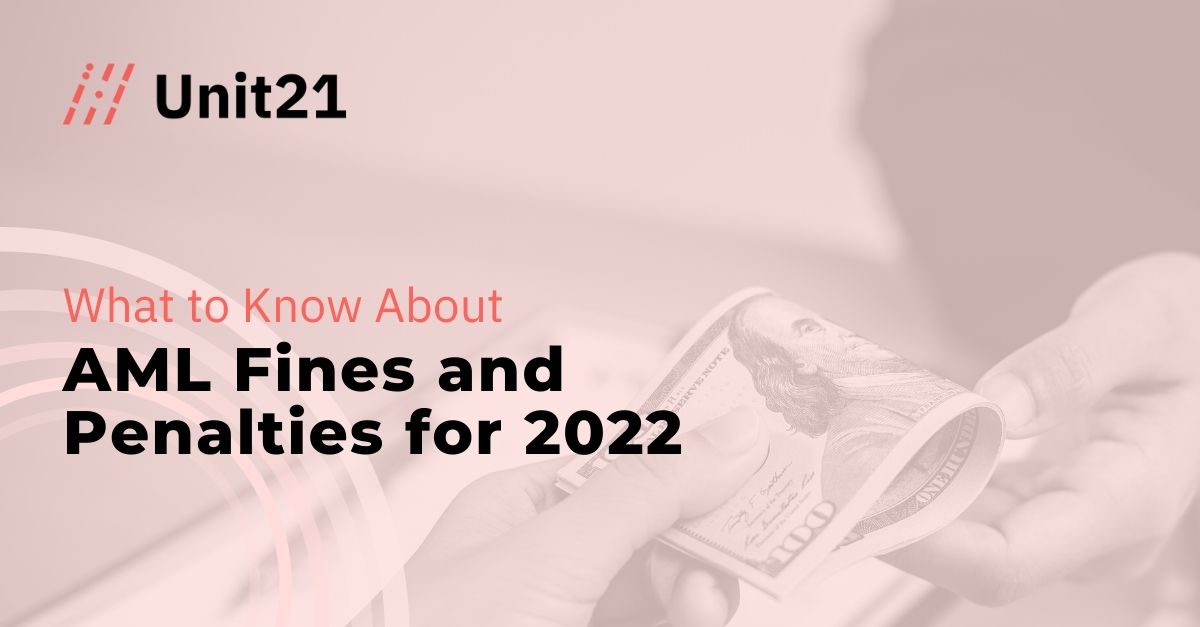 Money laundering is one of the most common types of financial crimes within the United States and around the world.

Depending on the nature of the alleged money laundering activity, individuals, companies, and other institutions can potentially face criminal charges—when these activities are deliberate and severe, which can mean jail time for the perpetrators.

But even if the activity is not done with malicious intent, those who fail to comply with specific regulations can be subject to severe fines. Along with the financing of terrorism and financial fraud, money laundering is something that the Federal Government and other financial regulators take very seriously.

This guide will discuss some of the most important things to know about the global state of money laundering today, including your organization's actions to remain in good standing with various international institutions.

As described by Cornell Law School, money laundering "refers to a financial transaction scheme that aims to conceal the identity, source, and destination of illicitly-obtained money. The money laundering process can be broken down into three stages.

First, the illegal activity that garners the money places it in the launderer's hands. Second, the launderer passes the money through a complex scheme of transactions to obscure who initially received the money from the criminal enterprise. Third, the scheme returns the money to the launderer in an obscure and indirect way."

Money laundering can (and often is) connected to various other common financial crimes, including tax evasion, asset inflation, drug trafficking, and more. In addition, criminals will often take advantage of the increasingly complex global financial network.

For example, they may utilize international (offshore) accounts, special holding companies, unique financial vehicles like cryptocurrency, assets that are difficult to value (such as art), and other resources to conceal their ongoing activities.

Unfortunately, in many cases, money laundering schemes will persist for years before any prosecutorial action is actually taken. Nevertheless, many money launderers do eventually get caught.

Here's a look at some of the most notable money laundering cases that have occurred over the last few years:

In both the United States and elsewhere worldwide, billions of dollars worth of money laundering activity are uncovered every year. And though the significant cases mentioned above represent just a tiny fraction of the money laundering and related illicit activities occurring around the world, these cases, among others, demonstrate that these sorts of activities are indeed taken very seriously and are often prosecuted to the fullest extent of the law.

BSA and AML Reforms to Expect in 2022

One of the most common problems observed by both federal and international prosecutors is that, despite their best efforts, many sophisticated criminal enterprises can adapt their money laundering and financial distribution strategies before they are even noticed.

Nevertheless, in response to the widespread existence of money laundering in an increasingly digital and globalized world, there are currently many efforts underway to give prosecutors a more comprehensive range of tools to work with.

According to Covington Financial Services, some of the most notable expansions include the Act's intention to:

The Act, which became law in December 2021 after an extensive legislative process, represents one of the largest overhauls of the broader BSA and AML system since the passage of the USA Patriot Act in 2006.

This is the 61st consecutive year that NDAA has been renewed (an essential Act for the military to operate). However, the number of changes put into place will vary significantly by year.

Over the course of 2022, there will likely be several components of anti-money laundering (AML) that will be prioritized in both houses of Congress and within many state legislatures.

One of the most likely focus areas will be the cryptocurrency and digital asset industries. Initially launched in 2009 following the establishment of Bitcoin, both of these industries have considerably increased in size—the current global market cap for crypto is currently estimated to be just under $2 trillion.

Proponents of cryptocurrency will often note the asset class's decentralized nature, allowing holders to control the value of the asset rather than a centralized authority like the Federal Reserve.

However, while this is indeed a clear benefit, it also makes these assets, along with other digital assets, like non-fungible tokens (NFTs), uniquely prone to money laundering. Thus far, there has been minimal legislation regarding how the movement of digital assets is reported, though this will likely change by the end of the year.

Priority will also likely be given to transactions connected to hostile foreign nations—particularly Russia. Following Russia's invasion of Ukraine, the United States unleashed a new wave of sanctions, causing Russia to pass Iran and become the most sanctioned country in the world.

AML Non-Compliance: Which Violations Result in the Largest Penalties?

Most AML non-compliance activity will be taken seriously by the Federal Government. However, priority is usually given to any activity that is connected to broader national interests, including money laundering linked to drug smuggling, but especially relating to any money laundering that is believed to be financing terrorist-related activity.

The USA Patriot Act has given the government incredible power to combat terrorism and terrorist financing, even allowing it to avoid specific standard court procedures (such as the need for a judge-issued warrant to look into vital financial records).

Even if an organization does not have any material knowledge of money laundering or money laundering-connected activity, the Federal Government still expects a basic level of due diligence from all financial institutions—failing to meet these standards can result in significant AML fines or, in some cases, even harsher penalties.

Within an evolving regulatory landscape, your AML compliance program must be adaptable, and your tech stack needs to be adaptable as well! In order to stay one step ahead of financial crime, your process should include screening for sanctions and politically exposed persons (PEPs), as well as the capability to perform sophisticated transaction monitoring.

Using a customizable platform like Unit21 can make it significantly easier for organizations to remain compliant and catch possible signs of money laundering. By combining three key components—identity verification, transaction monitoring, and AML case management—all companies subject to AML regulations can ensure they remain within the confines of the law and avoid any future fines or penalties.

The regulatory environment is rapidly changing, especially regarding digital transactions, digital assets, international transactions, eCommerce, and other ongoing developments. But by combining awareness with the best AML technologies currently available, it is still easy for companies to avoid near-term financial challenges.