First-Party Fraud: What it is and How to Prevent It 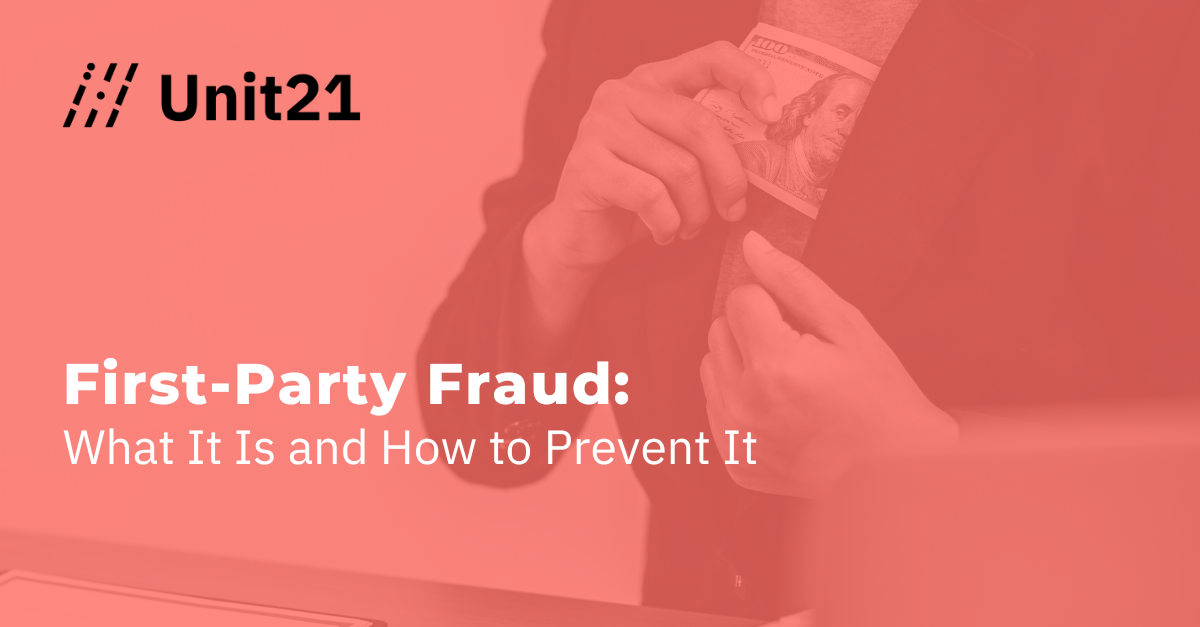 First-party fraud (FPF) is a growing concern for financial organizations as it is hard to pin down and can occur at three times the rate of traditional third-party fraud, according to Experian.

Therefore, financial organizations need to have the proper processes and tools to identify and limit it from occurring.

Utilizing data and transaction monitoring technology, it’s become easier for financial institutions to put the proper controls in place. Still, since there is no standard industry definition for addressing instances of first-party fraud, it is notoriously elusive, which begs the question: what is FPF, and how is it different from other types of fraud?

In this post, we’ll explore the ins and outs of first-party fraud, the main ways it takes shape, and best practices for preventing it.

What is First-Party Fraud?

Fraud, which can be an exceptionally broad term, occurs when one party deliberately and maliciously misrepresents who they are. Usually, fraud happens in pursuit of financial gain, but there are many other reasons why a malicious actor might also consider committing fraud.

To determine the type of fraud that is being committed, organizations need to identify these critical variables:

Third-party fraud is the most common type of fraud, so it may come as a surprise that sometimes, consumers use or manipulate their own information to commit fraud. In other words, when someone commits first-party fraud, they are not pretending to be somebody they are not—but they are fraudulently misrepresenting themselves somehow.

As is the case with second-party and third-party fraud, first-party fraud usually has some sort of underlying financial motive. This particular category of fraud typically occurs when an individual is hoping to get access to financial products they wouldn’t usually qualify for or obtain some form of financial gains like a discount code or loyalty program reward.

Because first-party fraud is not the most common type of fraud they’ll encounter, it is something that banks, credit unions, and other financial institutions will tend to overlook.

Nevertheless, depending on the type of fraud that is being committed, first-party fraud can be even more damaging to these institutions, in addition to being much more difficult for them to detect. This is why organizations must develop a robust fraud monitoring system that can identify—and stop—fraud as it emerges in many different forms.

Let’s cover the most common types of first-party fraud that organizations might encounter during the ordinary course of business.

One of the most common types of first-party fraud is when the perpetrator presents false information and manipulates documents when applying for access to financial products, such as credit cards, personal loans, or mortgages.

In these cases, borrowers will have to engage in an initial underwriting process that involves the presentation of various personal documents.

Some of the standard documents that will be looked at during this process include tax returns, bank statements, pay stubs (or proof of employment), proof of insurance, and more. If an applicant—the first party—knows that they are unlikely to qualify for the financial product they desire, they might consider altering their documents.

For example, they might misrepresent their bank statement to show they have enough cash for a down payment or fake a paystub to establish a better debt-to-income (DTI) ratio.

Applicants misrepresenting where they live—to qualify for location-specific financial products or even more “benign” products like access to a streaming service—can also be considered a form of presenting false information.

Unfortunately, this type of fraud is challenging to detect because, contrary to third-party fraud, the applicant is unlikely to call out any misstatements on their own.

Abuse is another somewhat broad category that can be used to describe a wide range of fraudulent activities. Abuse occurs whenever a first-party actor deliberately misuses a product, a system, or a process for financial gain.

One common form of abuse is known as “false victim” or “liar buyer” abuse. This occurs whenever an individual claims that some sort of action, such as making a purchase, was done by somebody else when, in fact, the action was originally done by them.

For example, if a company offers a generous refund policy, the person committing first-party fraud might place a large order and then claim, “I never ordered that—where is my refund?”

Unfortunately, many companies, especially large-scale retailers, are willing to take the customer’s word for this claim and will pay the refund. Through the use of abuse, the customer can then effectively obtain a product for free.

Another common form of first-party abuse is promotional abuse. There are countless instances of companies, particularly consumer-facing companies, that will offer promotions intended to attract new customers.

However, these promotions are typically limited to one per customer. Malicious actors will often find various loopholes (using multiple emails, multiple credit cards, etc.) in order to find ways around the one-person limit, even when the company made it clear this was not their initial intention.

A “bust out” refers to an instance where a person will access as much capital (often in the form of credit cards) as they possibly can, without any intention to pay back what they borrowed. Bust-outs often occur right before someone plans on declaring bankruptcy—they figure that their credit score will be destroyed anyway and their slate will be “wiped clean,” so they might as well get ahold of as many cards, and loans, or other capital vehicles as they possibly can.

Anyone who signs a contract to borrow money without a sincere intention to pay it back should rightfully be considered a fraudulent actor. Bust-outs sometimes occur when someone owes money to a malicious organization (illegal gambling debt, loan sharks, etc.) and is actively being extorted.

Social engineering is a form of aggressive and deceptive actions that cause someone to “willingly” give their money to a bad actor. In the digital era, many social engineering schemes will have a romantic angle to them, such as a supposed romantic partner who needs to borrow money for various reasons (secure a passport, plane tickets, etc.).

In addition, people who fall for social engineering schemes will sometimes request refunds from the financial institutions they work with—while these people should certainly be classified as victims, this can also create a moral gray area for lenders.

The effects of first-party fraud can vary depending on the level of fraud being committed.

If, for example, a person completely misrepresents their income and assets in order to secure a $1 million mortgage—meaning a near-term foreclosure is likely—this can end up costing the original lender tens of thousands of dollars.

When these sorts of fraudulent schemes are executed at scale, the damages become even more noticeable.

This is why taking preemptive actions to prevent first-party fraud is vital to limiting exposure.

Fortunately, there are quite a few ways to detect and prevent first-party fraud. First, actively monitoring for suspicious activity can help reduce fraud incidents. If someone maxes out a credit card the first day they have it, that should raise a red flag that future transactions should not be processed.

Using networks like industry consortiums, public data (for instance, credit reports), or information from outside parties about a specific customer or potential customer is also helpful for identifying bad actors.

For example, if a customer is flagged as being part of a fraudulent event in the last few months, this could signify that they are not accessing the product with good intentions and should signal further investigation into that person’s history and background.

While none of these actions, in isolation, prove a person to be guilty of anything, it is clear that financial institutions have cause to be suspicious whenever patterns emerge.

Furthermore, working with a platform designed to help organizations fight financial crime, such as Unit21, can make a world of difference. Schedule a demo to see the platform in action today.