3 Stages of Money Laundering: Insights From an Ex-Undercover DEA Agent 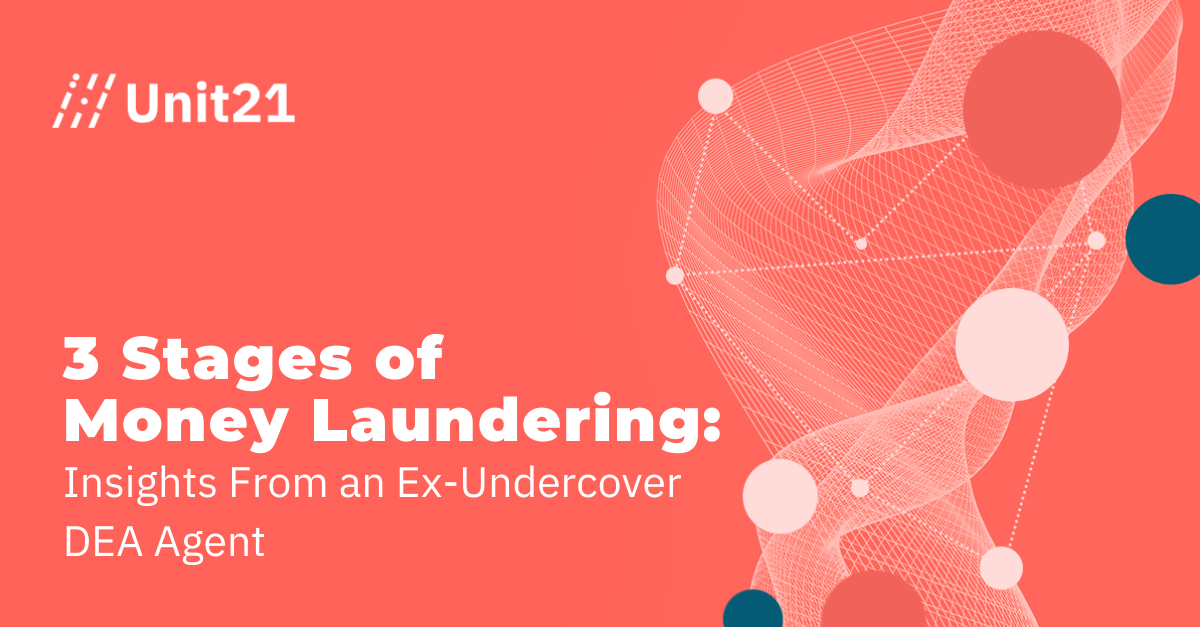 First, bad actors must place illicit proceeds into the financial system. Completely untraceable, cash is optimal for this purpose, particularly in myriad small-denomination increments. After the funds are placed, launderers then muddle the trail of funds via a maze of payments and purchases to obfuscate the suspect origin of the money.

Finally, after conspirators feel confident their funds have gone through enough transactional ‘hops’ to lawfully justify their custody of assets, cash or otherwise, they finally successfully integrate their funds into the legitimate financial system.

Despite the superficial simplicity of this setup, criminal organizations and kleptocrats still manage to launder an estimated $5.8 trillion annually, according to John Cusack, the former co-chair of the non-government interbank association Wolfsberg Group. Yet far less than one percent of this filthy lucre is ever interdicted by global authorities.

The reason for this severe disparity is manifold. For example, while money laundering expert and former U.S. federal agent Robert Mazur, who previously infiltrated both the Medellin and Cali drug cartels as a long-term undercover money launderer, cites deficient political will to combat financial crime, professional laundering tradecraft is decidedly sophisticated.

While cash remains the most prevalent, preliminary staging channel for organized crime groups, the pandemic significantly reduced cash-based transactions. Regardless, global drug trafficking organizations, which generate the bulk of their retail revenues selling their product to destitute addicts in the slums, still generate large sums of small-denomination cash.

While there is an ongoing debate about which predicate criminal offense generates the highest volume of illicit funds, with the U.S. Treasury blaming fraud, other experts citing tax evasion, and others still pointing to international drug trafficking, the three fundamental stages of money laundering remain the same.

This overview will explain the stages within the context of the complex Cali cartel, trade-based money laundering (TBML) conspiracy recounted by Mazur in his recent book, “The Betrayal.”

While the events of Mazur’s story transpired some three decades ago, the former undercover has confirmed that this essentially undetectable mechanism for value transfer remains alive and well to this day. Washington DC-based think tank Global Financial Integrity concurs with Mazur, asserting that trillions of dollars are washed via TBML annually.

Over a period of two years, starting in 1992, Mazur infiltrated the upper ranks of the narco-money-laundering underworld, operating out of Sarasota (Florida) and Panama City (Panama), and Bogota (Colombia).

For the operation, codenamed Pro-Mo (shorthand for professional money-launderers), Mazur assumed the identity of Robert Baldasare, an invented persona who controlled a mortgage brokerage, a trade-finance company, and other offshore businesses and legal entities, including a foundation in Lichtenstein.

These fronts were all part of the ruse to lure in various Cali cartel associates and laundry men to “wash” or assist him in legitimizing millions in drug money. Mazur’s laundromat hinged on two primary placement conduits.

First, the undercover largely received drug money that had already been placed into the financial system by low-level cartel couriers in bulk non-depository checks delivered to his covert partners in bulk.

Most of these Moneygrams, cashier’s checks, traveler’s checks, money orders, and similar instruments were structured under $3,000 and in odd amounts to evade money-service business (MSB) recordkeeping requirements.

Mazur also received and laundered duffle bags stuffed with cash in six-figure to low seven-figure drops. Once Mazur’s undercover laundering crew took possession of these cash and checks, he would place or further layer, respectively, the drug money through his business fronts.

Mazur’s mortgage company had a stake in a check cashing business.

This setup enabled him to receive the muled non-depository checks, endorse the blank payee form with a stamp from his business, and deposit it into the business’ bank account. Mazur would keep his laundering fee and wire the remaining cartel funds to his mortgage business.

Mazur then wired cartel funds to his trade-finance business bank account from his brokerage. These transactions were disguised as loans from outside investors.

With the bulk cash drops, Mazur routed funds to an offshore business bank account that had a relationship with a U.S.-based branch. The undercover would then wire the money to another offshore bank account, where Mazur would pocket his laundering fee. Trafficker funds then flowed to Mazur’s trade-finance front.

Mazur had cover letters and related trade documents created to prove to the bank and the traffickers’ launderers that the funds being remitted to Colombia were well-disguised to consummate the last hop of the spin cycle.

Assisting Mazur in this process were corrupt Colombian bankers in the pockets of the Cali Cartel controlled, who helped enhance the legitimacy of the transfers with official-looking Documents of Exportation. These documents ensured that two types of valid export transactions justified the repatriation of cartel funds in Colombia.

The first cover story was that Mazur’s trade-finance entity collected these drug funds on behalf of the exporter to whom the wire was being sent. The alternative justification was that Mazur’s company was making an advance payment of export revenue, predicated on the exporter’s projected sales in the U.S. Funds were generally wired through a payable-through account at a Colombian bank branch in Miami.

A payable-through account is similar to a correspondent banking relationship, where a local institution processes transactions on behalf of a foreign-based bank that lacks a presence in the country hosting the transfer. That is to say, the recipient of the laundered dollars, in Mazur’s case, a Colombian trade-finance company, didn’t have an account in the U.S., only an account back home denominated in pesos.

Through the eyes of a crooked bank compliance official, this type of international transaction was sufficiently justifiable to regulatory authorities because finance companies generally manage export revenue for export companies in Colombia.

Moreover, once the financing company received the funds, they wired money back to trafficker-controlled accounts, thus integrating drug money with all the appearances of legitimate repatriation of trade-related proceeds.

But the increasing accessibility of smartphones and the rise of mobile payments during the pandemic is transforming the risk landscape.

On top of that, the lingering prevalence of secrecy-friendly offshore jurisdictions, global regulatory fragmentation, and an all-too-willing army of corrupt white-collar enablers ready to launder dirty money for the right price is complicating detection for financial crime investigators.

In this environment, Mazur says that AML investigators should focus on tracking all the hops “payment chain” and drill down on all the people, entities, and ownership structures underlying those transactions. Sharp bank AML investigators are essential to this mission. But frontline financial investigations units (FIUs) are overwhelmed by the explosion of high-dimensional big data (HDBD).

How Unit21 Can Help with AML Compliance

The financial data ecosystem has become particularly complex in the age of mobile banking and ‘instant’ non-bank online payment platforms. In 2022, money moves faster than ever before in history.

To help address these challenges, Unit21 provides a holistic trio of advanced solutions to empower investigators with leading-edge, no-code tools.

For onboarding orchestration, Unit21 offers an operating engine with custom workflows and automation to combine KYC/KYB data with other data sources to onboard users. And Unit21’s Data Monitoring identifies suspicious activity via anomaly detection in clients’ historical financial behavior and stated account purpose.

And while Regtech should not be looked at as a panacea for stopping financial crime, flexible and responsive management, investments into adaptable technology, and a holistic approach to AML compliance allows organizations to keep the systems, processes, and people effective in responding to the ever-growing demands and complexity of AML challenges.

Learn how to build a successful AML program that tackles both fraud and AML compliance.

Schedule a meeting to learn more about how Unit21's no-code software can help your risk and compliance operations team.