How to Address the Changing Face of Fraud: 4 Experts Weigh In 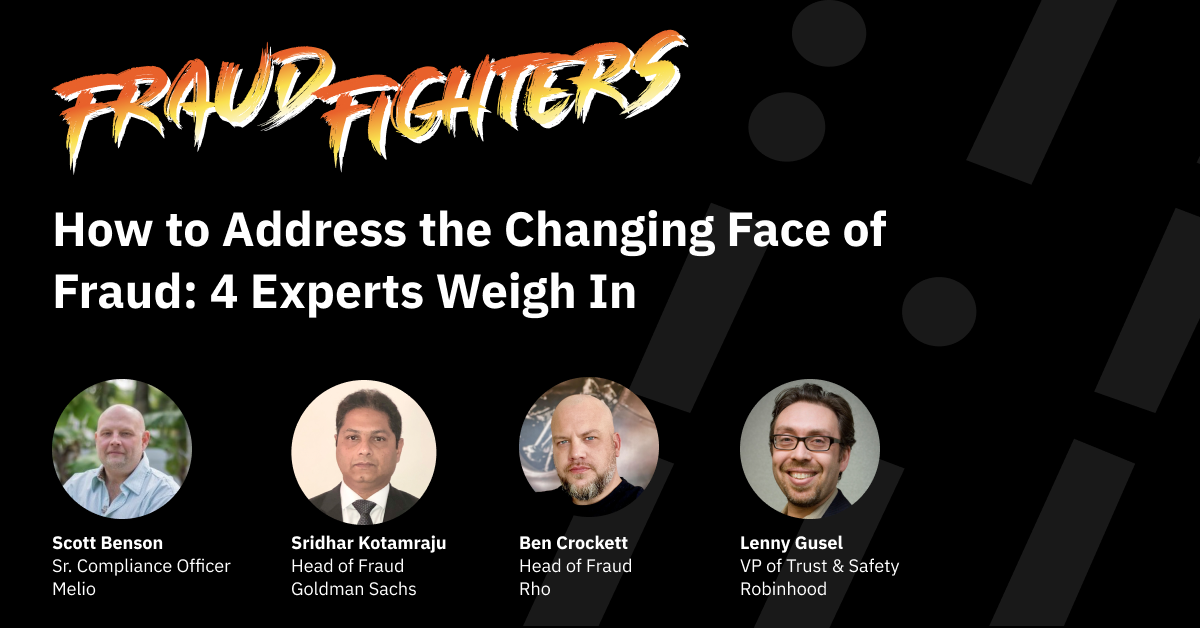 Fraud is constantly evolving, and staying one step ahead is key.

That is why in 2022, Unit21 launched an in-person event series called “Fraud Fighters,” where leading voices in risk, fraud, fintech, compliance, and crypto came together to share their insights on the industry’s most prevalent topics.

Here, we’ll showcase some of the main highlights from four of our favorite discussions featuring input from organizations like Goldman Sachs, Rho, Robinhood, and Melio.

At our San Francisco event, Unit21’s CEO Trisha Kothari sat down with Sridhar Kotamraju, Head of Fraud at Goldman Sachs, to get the details about his experience with scaling fraud strategies and the challenges facing teams, both large and small.

According to Kotamraju, traditional methods of looking at fraud no longer work. He goes on to explain the three biggest challenges facing modern financial organizations concerning fraud prevention.

“One of the biggest challenges is that fraudsters and bad actors look for control gaps, so in today’s world, financial institutions must look at the cross-channel activity instead of only looking at singular channels. Another significant challenge is having data that lives in silos.

There are too many data sets, too many decision points, and it’s difficult to integrate all of the various risk inputs. Lastly, fraudsters don’t have to deal with regulations, whereas banks do. The time to respond to threats is critical. However, by the time a fraud pattern has been detected, and a new rule has been implemented, oftentimes, it’s already too late.”

When asked what advice he would offer to companies looking to scale their fraud programs successfully, Kotamraju reminisced about the transition he made out of the technology industry and into financials and that it was a bit of shock to see how drastically different the pace of response is within the finance industry.

He went on to suggest that one of his key career learnings was that embracing new technology and being diligent about customer education is essential in order to scale successfully.

“Just because a tool has been adopted does not mean it is something that has to continue to be used. As fraud has evolved, traditional tools don’t work anymore. Unfortunately, new technology like machine learning has not been leveraged at scale within these larger institutions, so that is one opportunity still out there.

Another is that the customer will almost always be the weakest link. Organizations must adopt customer education strategies to keep them safe.”

Rho: “Outside the Box” Fraud Fighting

At our Fraud Fighters NYC event, Unit21’s Head of Fraud Risk, Alex Faivusovich, sat down with Ben Crockett, Head of Fraud at Rho to discuss how he got started in fraud-fighting, his experience in the industry, best practices for preventing fraud, and some predictions for 2023 fraud trends.

When asked about how he became a fraud fighter, Crockett responded that he didn’t actually know that this would be his career path after going to college.

“I don’t think anyone goes ‘I want to be a fraud fighter.’ After college, I actually started at a startup Fintech that had no fraud solution, and being that my background was in business intelligence and operations, they asked me if I wanted to take over this ‘dispute’ team.

I had to get up to speed with Reg E and get this team compliant, and from there, I ended up building my own fraud reports and SQL dashboards, and that is how it all started for me.”

And when it comes to fraud prevention, especially for startup Fintechs, Crockett notes that adapting quickly to changes is critical for mitigating fraud losses.

“There’s a failure to understand fraud and how to fight it effectively. The first thought many organizations have is to build out a solution internally. And they spend many years and hundreds of thousands of dollars building something that doesn’t work.

Fraud is rapidly changing, and businesses need to be able to adapt quickly without waiting on internal engineers to build something out.”

During our New York event, Unit21’s VP of Marketing, Aditya Vempaty, sat down for a fireside chat with Robinhood’s former VP of Trust & Safety, Lenny Gusel to better understand some of the most significant fraud issues he saw during his time at Robinhood and how they tackled these problems.

When asked about the main fraud challenges he saw while at Robinhood, Gusel said that he could categorize them into three things. The first was called “instant abuse” and Gusel stated that this was by far their biggest issue.

“If you deposited via ACH into your Robinhood account, we gave you credit instantly. We experienced that people would then take that credit and make trades for short-term options (as an example), and if the trade didn’t go well, they would churn and go away. For many reasons, this was not an easy thing to see and was a complex challenge for us to address.”

Gusel noted that the second challenge was account takeover fraud, and the third was every form of new account fraud imaginable. When thinking about how Robinhood garnered the resources to address these issues, Gusel stated that their CEO and board were very supportive.

“We had very enlightened leadership that understood that the company would live or die based on how well they did this discipline.”

Also in New York, Trisha Kothari interviewed Scott Benson, Sr. Compliance Officer at Melio about his experiences in the world of Fintech and his thoughts on FRAML.

When asked about whether he believes FRAML is and should be a thing, Benson answered that he believes it depends on the organization with regard to their stage and maturity.

Regardless, even if you don’t have the two teams under the same umbrella, transparency and communication within the organization is key. Everyone can’t be their own island. Where you have fraud, you are very likely to have money laundering. These teams need to be working in concert together and rowing in the same direction for the company as a whole to be successful in combating financial crime.”

Ultimately, several themes flow through each of these conversations, including that careers in fraud fighting are never clear-cut, organizations large and small face similar challenges, and that the key to success is remaining diligent in selecting the right solutions, educating customers, continuous optimization of rules, and keeping the organization aligned on building a culture of compliance and prevention.

Interested in joining our next in-person Fraud Fighters session or any of our virtual events? Check out our events page to see what is coming up next, or sign up for our newsletter to stay in the loop: